At its annual Ignite conference on November 2, Microsoft announced a new productivity app called Microsoft Loop. With Loop, users create and collaborate on independent blocks of content. By breaking free of the traditional boundaries between applications, this new tool facilitates fluid collaboration in the hybrid workplace.

For example, a user can create a table for brainstorming project ideas, sharing the table with various team members through Teams chat or email. Multiple users can edit the table simultaneously, and changes sync automatically, regardless of where users view and edit the table.

Because Loop components live independent of their parent applications, users can collaborate without jumping back and forth from one application to another. And they no longer need to worry about multiple file formats.

Consequently, team members can compile project components in a single view, including task lists, status tracking, meeting notes and more. With all edits immediately visible to everyone with access to the components, Loop creates a single source of truth. Thus, all team members have ready access to the most current information.

Continuing the theme of flexibility, Loop will be available to users in a couple of different ways. Beginning this month, Microsoft 365 customers will be able to use various Loop components in Microsoft Teams chats and other Office apps.

Additionally, Microsoft will release a standalone Loop app. This will consist of a collaborative hub made up of three elements: components, pages, and workspaces. The app provides a canvas on which to organize various components, making it easy to view and manage multiple aspects of a project from one place.

Loop components (also referred to as “live” components) are the single blocks of productivity on which colleagues collaborate. These include items such as a list, note or task. Users create them in whatever Office app they wish and then share them by embedding them in a chat, document, meeting, or email. Edits appear in real time along with the initials of the editor.

In addition to the existing components such as lists and tables, Microsoft announced two new components at Ignite. The voting table component provides an easy way for teams to brainstorm and vote on ideas, discussing pros and cons. The status tracker enables project teams to track all aspects of a project, keeping all team members up to date.

In the future, customers will also have the ability to create and incorporate their own components and components created by third-party developers. Components can run the gamut from a simple table to a robust customer record from Dynamics 365.

A Loop page provides a place to organize a group of related components. Think of it as a single document that includes elements from multiple applications. For instance, users no longer need to open Excel to edit a spreadsheet, then Outlook to view a related email and Word to work with item descriptions. Instead, the page includes all those components in one space. 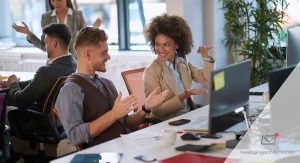 A Loop workspace looks like a project board that includes all pages and components related to a project. People can track the entire project from one location, checking progress, joining a discussion and collaborating both synchronously and asynchronously.

Microsoft has already begun rollout of some components across Microsoft 365 apps. More components will become available for public preview in Teams, Outlook, and OneNote in the coming months. And, while Microsoft has not announced a date for the rollout of the standalone Loop app, insiders envision a summer 2022 timeframe.

As Microsoft continues to develop productivity and security tools, reach out to the Microsoft experts at Messaging Architects. We can guide you through configuring Microsoft apps for optimal use and even help you use features you had not yet discovered.